This article by Monique Holland was originally published on the Martinsville Bulletin here.

MARTINSVILLE, VA – Natalie Hodge’s second season of “Hometown Hustle” is double what last year’s first season was, both in length of episodes and numbers of participants.

The second season is branching out of the area into 11 communities including Patrick County, Brunswick County and Prince Edward County. “It was a gift, because we got to travel to places that we hadn’t necessarily been to before and see the thematic similarities to Martinsville-Henry County,” Hodge said. 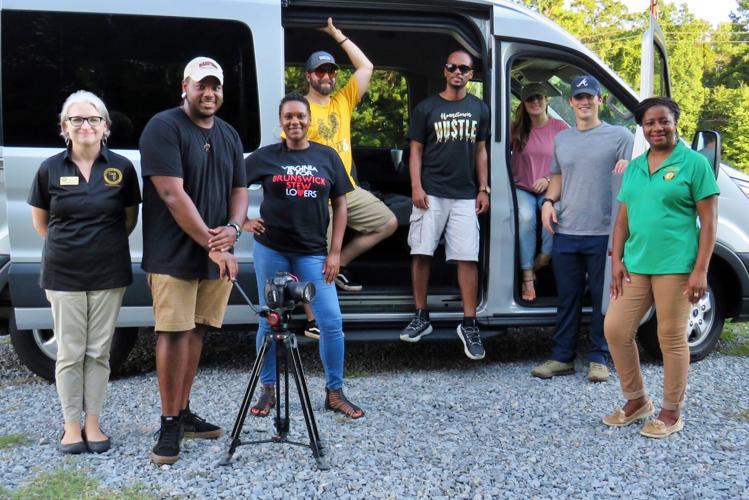 At twice the time of the previous series’ episodes, each episode will feature two businesses with toggling storylines. The episodes also have bonus elements from other businesses in the area that weren’t featured for a full episode and comments from area residents.

The way the show will be distributed is still being decided, Hodge said. It may air on YouTube like the first season, but there is also a possibility of it being picked up as a television series.

It may be released as early as October, she said.

“This is definitely a goal for the show” for small businesses to get exposure, Hodge said. “For these small businesses who take time out of their busy lives to spend the day with us to get a benefit from it and it’s 100 percent free for them to be a part of the show.”

The filming of this season took around a month and featured a range of newer and established businesses. Thematically, Hodges was selective in what kind of businesses she wanted to feature like a veteran-owned business, agricultural businesses and businesses connected to trades.

Other than that input, the businesses were picked through an application process that Hodge said she stayed out of as much as possible. The rest of the Hometown Hustle team made the final decisions on featured businesses because in this community, and even as far as Danville, Hodge is friends or acquaintances with many business owners.

“Then it’s like ‘How do you pick this person over that person,” and I know everyone has an amazing business and an amazing story,” she said.

The process started with an interest form that was followed by a detailed questionnaire. Other businesses were recommended through chamber of commerce and economic development committees. Her team selected the participating businesses.

“The feedback that we’ve gotten from potential distributors is that this is a show that could be nationwide. It could be an international show,” Hodge said. “Every hometown has hustlers, people that are making it happen with their small business.”

Hodge grew up in Martinsville and after spending time in New York, Las Angeles and Detroit, she returned home planning to run Rudy’s Girl Media out of Martinsville and travel to film, she said.

She did so for a while until it became “impossible to manage” and, she said, “I’m so glad that that happened because the gift of doing it here is that it’s opened doors for other people to live their dreams.”

The conception of Hometown Hustle started when Hodge was working in her father’s store when she was growing up. Rufus Hodge Grocery, named after him, was in Leatherwood.

“Watching him manage this family business … I learned so much and from that and I knew that I was going to have my own business one day,” she said.

More inspiration came from her work as a title project director and special project coordinator for Ross Innovative Employment Solutions and a Workforce Development provider, as well as witnessing small businesses struggle, survive and thrive during COVID.

“I was so impressed by the small businesses here and their creativity,” Hodge said. “I was like, it would be great if I could use my gifts and talents to bring those stories to life, because I feel like in all the business-show television that I watch there really isn’t this emphasis on rural communities, on small business ownership … and I wanted to be the person to break through to do that.”

Want to build relationships with other small businesses and resources?

Register for an upcoming RISE meetup!